Why we felt there was a need for a full-stack open source observability platform and how we went about building it.

The 3 pillars of observability​

Observability is the ability to infer the state of internal components given the external state values.

Metrics have been in use for long to detect any change in the value of a measured quantity. Like, measuring your footsteps over a day is also a metric. It's good to understand the overall  aggregated state of the measured quantity.

Prometheus is popularly being used as a tool to store, analyze and alert such metrics. Prometheus is a pull-based system that scrapes metrics from targets. Eg, a service exports metrics at 0.0.0.0:8081/metrics. Prometheus should be able to scrape those metrics on a fixed interval when that endpoint is defined as the target in config.

Distributed tracing is tracking a request as it goes from one service to another, across process boundaries up to the database, and generating multiple events while doing that. Each request is called a trace and the events are called spans. Trace data is very useful in debugging issues as it contains details about each request.

Jaeger is the latest distributed tracing tool open-sourced by Uber.

We have been using logs for long to debug applications. For an application handling 100s of concurrent connections, logs become difficult to make sense due to missing chronology order and consider browsing logs in a centralized logging system where all applications dump their data at 100Ks log-lines per second.

Elastic is a popular open-source tool used to collect, search, process & visualize logs. The new thing about logs is structured logs where we assign key-value pair values in log lines and making it much efficient in storage.

Loki by GrafanaLabs is one such effort in making logs more usable and cost-efficient.

The Easy and Hard things about Prometheus​

Prometheus is very easy to get started. You just need to run a few exporters to start monitoring your nodes, dbs, queues, etc. In Kubernetes, you can also get kube-state-metrics. Prometheus also has a powerful query language called PromQL, which enables you to run SQL-ish queries.

Prometheus lets you write powerful alert logic and store alerts as code. It has an alertmanager to group or silence alerts and notify channels like Slack and PagerDuty.

But when you look to deploy Prometheus in a large company, there will be things you need to consider.

Below are the Hard Things about Prometheus:​ Mongo and Redis throughput and latency by Application

The need for Distributed Tracing​ 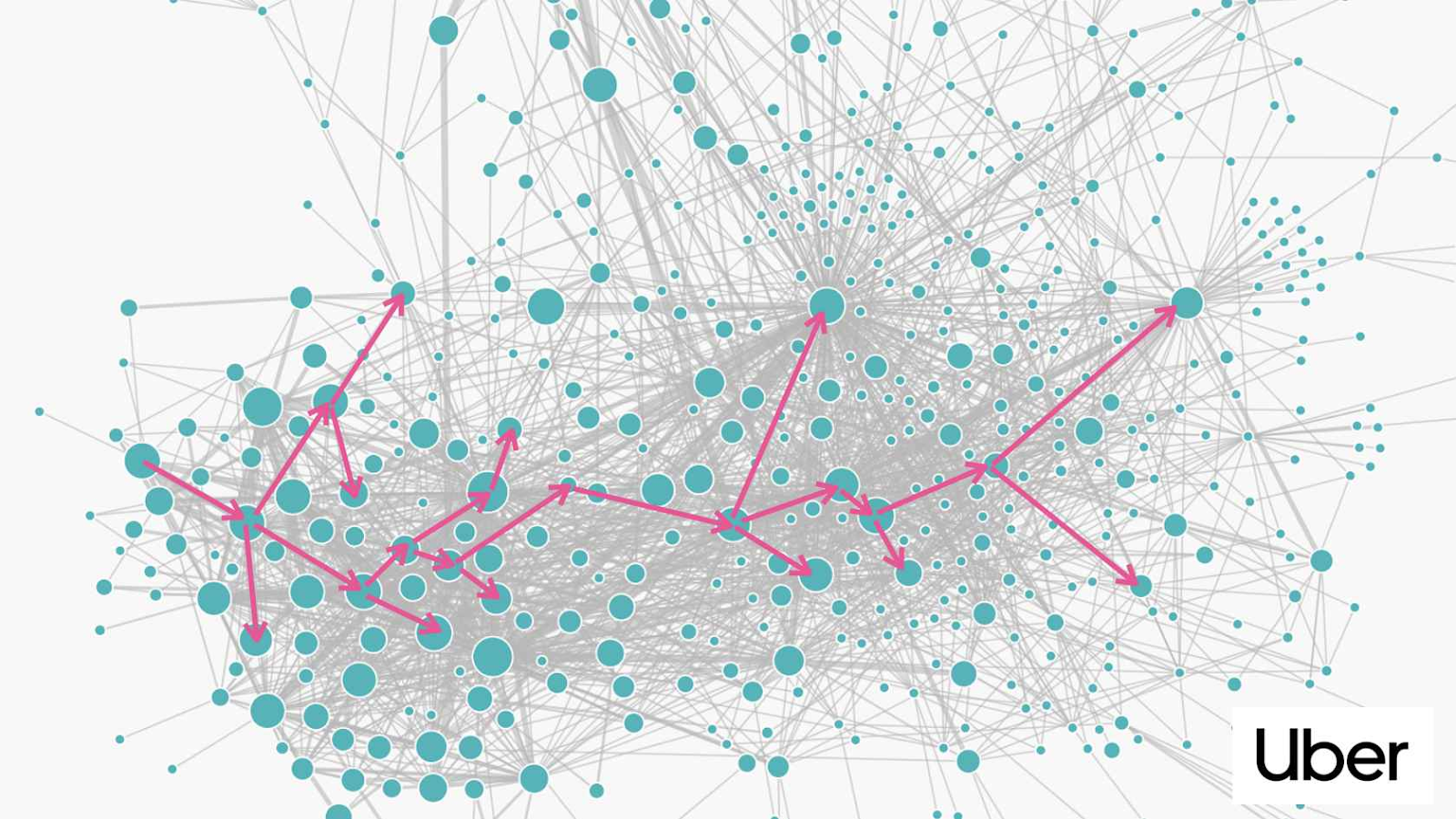 The above image depicts the flow of a request in Uber. They have thousands of services running and any request goes through multiple services and machines before returning to the user.

If something breaks, we would want to know whether downstream services failed or any particular instance was causing the issue or a new deployment is causing the errors.

You can see individual traces in the Jaeger UI. The number of services this request passed through, the number of spans/events generated, the total time of the trace. You can also filter the traces based on service, duration and tags.

TraceView in Jaeger shows details of a trace listing out all events and their timings.

TraceView of Trace in Jaeger

Also, on clicking on a span, you can see details about that span, like, tags associated with it.

A distributed trace shows you details about each execution step of a request and thus becoming very useful in debugging issues. 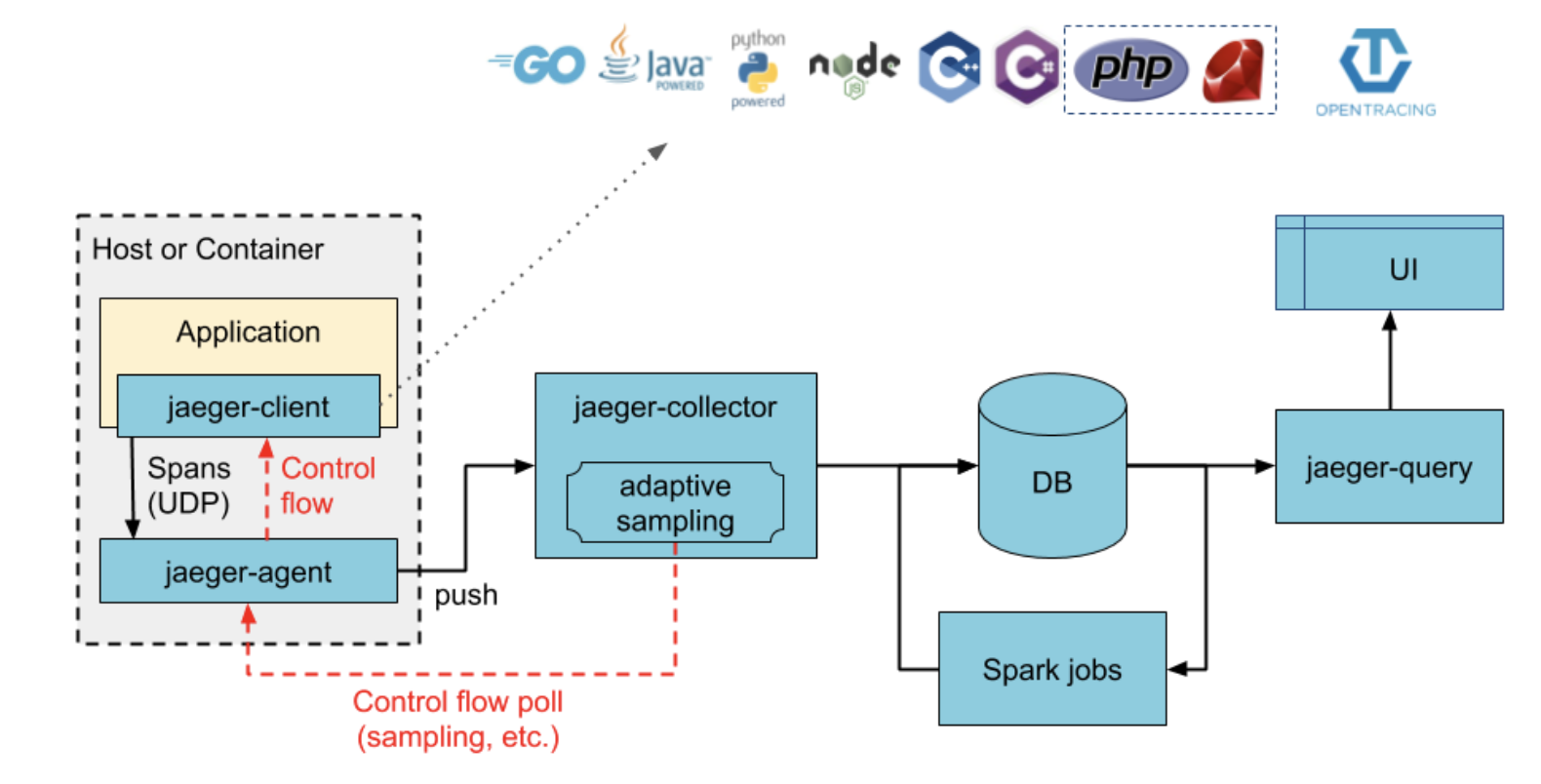 Metrics and Tracing together​ The above architecture uses both metrics and tracing data as independent silos, starting from different collectors to different queriers. We tried building a unified UI that can query metrics from Cortex querier and traces from Jaeger querier. But it quickly got very complex.

Why we built SigNoz?​ 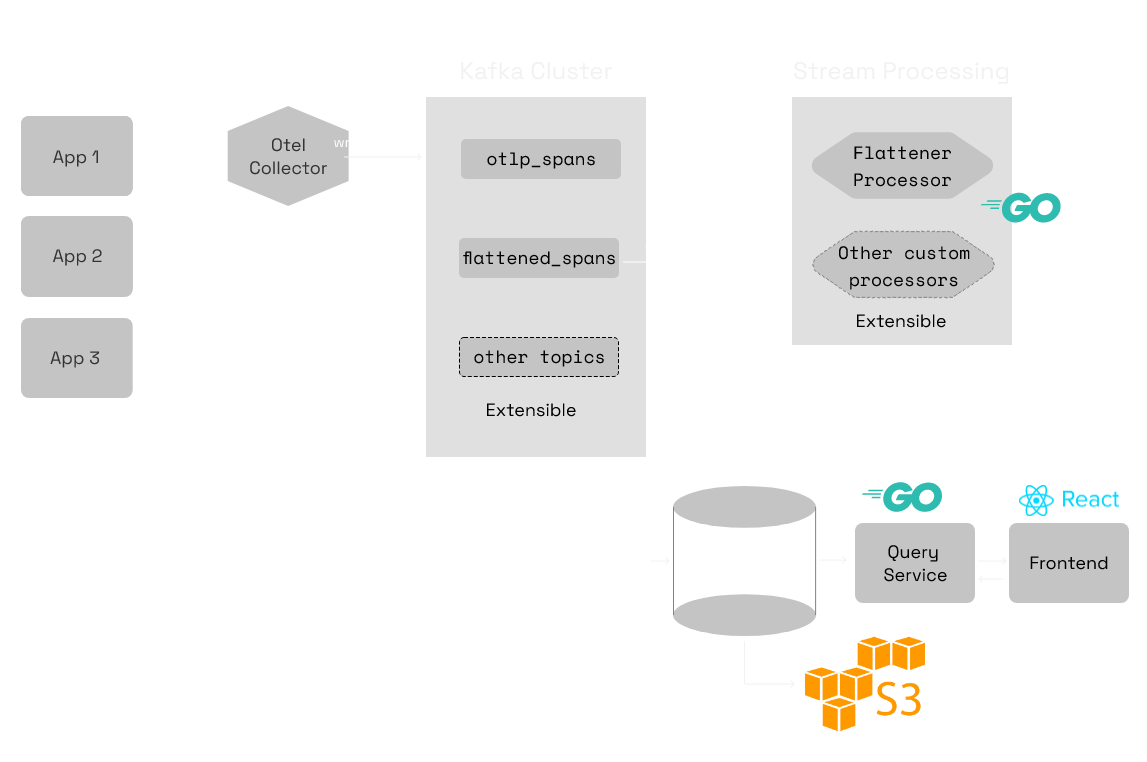 OpenTelemetry Collector can receive data in multiple formats. It currently has receivers for the below formats:

OpenTelemetry Collector then exports those traces to a Kafka topic, otlp_spans.

Apache Kafka is a distributed streaming platform that can be used as message-driven backbone of communication. Applications can send messages between its components in the form of records that can be produced to Kafka topics and consumed from Kafka topics.

Our stream processing applications read from otlp_spans kafka topic and flattens the structure of spans to be ingested to databases like Druid. This flattener-processor writes to flattened_spans topic in kafka.

The flattened data is then ingested to Druid *which is a real-time analytics database* designed for fast slice-and-dice analytics (OLAP queries) on large data sets. We use streaming ingestion from Kafka to Druid.

Query Service is the interface between Frontend and Druid. It provides APIs to be consumed by frontend application and queries Druid to fetch data and process data before responding to the frontend.

Frontend is the UI, built in ReactJS and Typescript, provides advanced trace/span filtering capabilities and plot metrics to give service overviews.

Why we chose Apache Druid?​

How to start using SigNoz with OpenTelemetry?​

OpenTelemetry is a vendor-neutral instrumentation framework that provides libraries and tools in various languages to start sending telemetry data compliant to a standard.

To gain observability into your applications you need to follow 2 steps:​

For example: to instrument your Java application​

Download the OpenTelemetry java instrumentation library and run the below command:

where app_name is the name of the application and myapp is the jar file for that application. <IP of SigNoz Backend> is the IP of machine where SigNoz is installed.

That's all you need to see the beautiful dashboard of SigNoz with all your metrics and traces being explorable. FlameGraph of a trace in SigNoz

In this blog, I have laid out why we created SigNoz and how it differentiates from other tools in the market today.