OpenTelemetry is a Cloud Native Computing Foundation(CNCF) incubating project aimed at standardizing the way we instrument applications for generating telemetry data(logs, metrics, and traces). However, OpenTelemetry does not provide storage and visualization for the collected telemetry data. And that’s where an OpenTelemetry backend is needed. 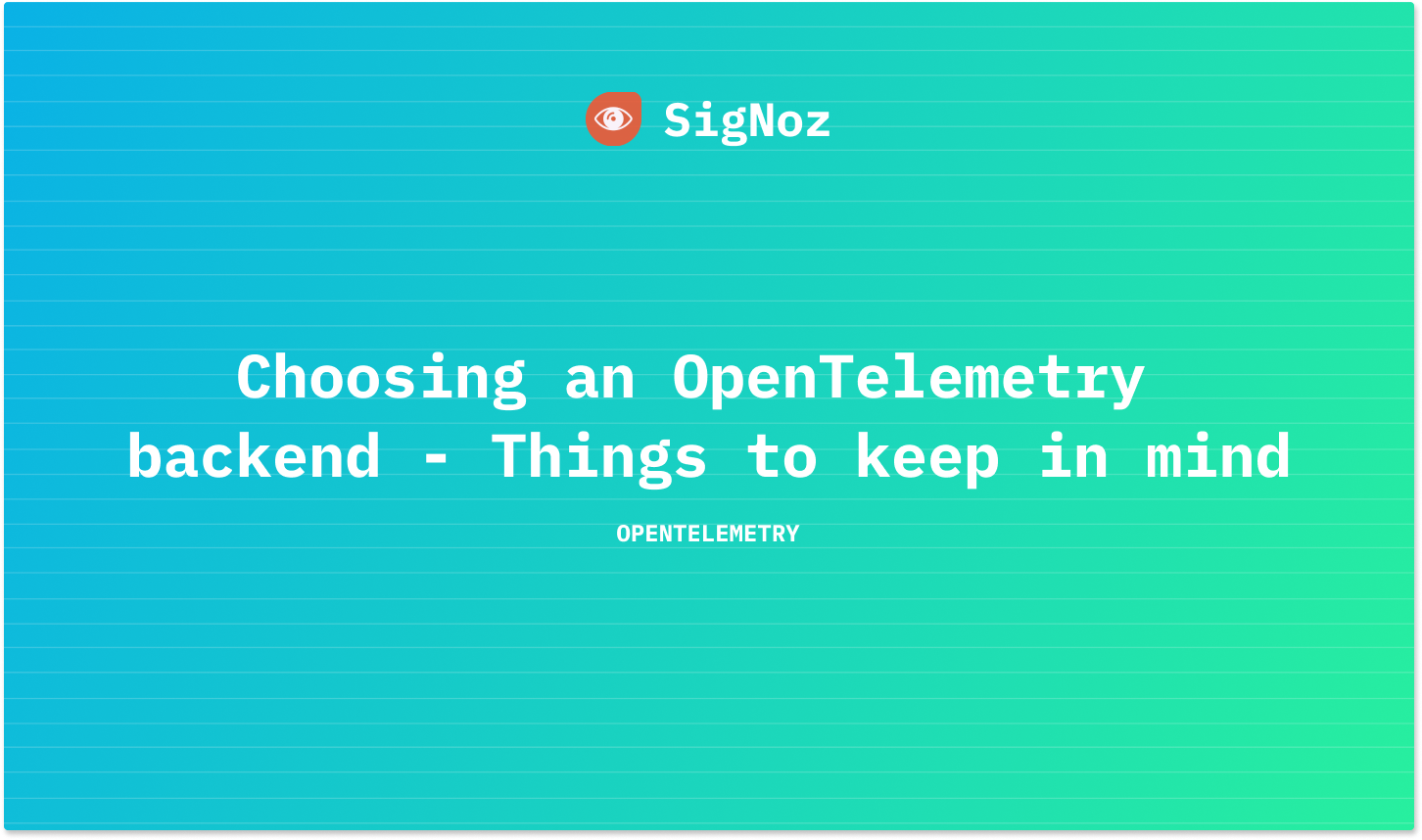 Cloud computing and containerization made deploying and scaling applications easier. Modern applications make use of modular code and architectures like microservices and serverless. Engineering teams can ship features faster, and any surge in user demand can be met by just spinning up more containers.

But every coin has two sides. While having benefits like smaller engineering teams and on-demand scaling of applications, cloud computing and containerization have also increased operational complexity manifolds. Troubleshooting an application based on a distributed system for performance issues is like finding a needle in a haystack.

OpenTelemetry solves this problem by creating an open standard for generating telemetry data. Let’s learn a bit about OpenTelemetry.

OpenTelemetry is an open-source collection of tools, APIs, and SDKs that aims to standardize the way we generate and collect telemetry data. It follows a specification-driven development. The OpenTelemetry specification has design and implementation guidelines for how the instrumentation libraries should be implemented. In addition, it provides client libraries in all the major programming languages which follow the specification.

OpenTelemetry was formed after the merger of two open-source projects - OpenCensus and OpenTracing in 2019. Since then, it has been the go-to open source standard for instrumenting cloud-native applications.

The specification is designed into distinct types of telemetry known as signals. Presently, OpenTelemetry has specifications for these three signals:

Why does OpenTelemetry need a backend?​

The founders of OpenTelemetry wanted to standardize two things:

Once we have the telemetry data in a consistent format, it can be sent to any observability backend. This provides users the freedom to select any OpenTelemetry backend based on their observability needs.

The aim of OpenTelemetry was always to have a pluggable architecture using which users can build robust observability stacks using additional technology protocols and formats.

Here’s a snapshot showing how OpenTelemetry fits within a microservice-based application and an observability backend.

Things to look out for when choosing an OpenTelemetry backend​

Below is the list of factors that should be taken into consideration before selecting an OpenTelemetry backend:

Nearly all observability vendors now claim to be 100% compatible with OpenTelemetry. But it’s difficult to move away from legacy systems. A solution built natively for OpenTelemetry can be a good choice for an OpenTelemetry backend. And that’s where SigNoz comes into the picture.

Trying out an OpenTelemetry Backend​

If you want to play around with an OpenTelemetry backend, it is easy to get started with SigNoz. SigNoz is an open source APM built natively on OpenTelemetry.

SigNoz can be installed on macOS or Linux computers in just three steps by using a simple installation script.

Once your application is instrumented with OpenTelemetry client libraries, the data can be sent to the SigNoz backend by specifying a specific port on the machine where SigNoz is installed.

You can then use Signoz to monitor application metrics with out-of-box charts and visualization.

The tracing signal from OpenTelemetry instrumentation helps you correlate events across services. With SigNoz, you can visualize your tracing data using Flamegraphs and Gantt charts. It shows you a complete breakdown of the request along with every bit of data collected with OpenTelemetry semantic conventions.

SigNoz also lets you run aggregates on your tracing data. Running aggregates on tracing data enables you to create service-centric views, providing insights to debug applications at the service level. It also makes sense for engineering teams as they own specific microservices.

You can check out the SigNoz GitHub repo here: